The year that Lilli died was full of ups and downs. Our best memories and brightest moments were mixed with this dark unspoken fear that Lilli would die. Most days, we chose to hang on to hope and move forward as if the inevitable was easily escapable. There were many, many moments that helped sustain this reckless hope.  A few stand out.

In February of that year, Aaron, Lilli, and I were meandering through Disney World, having the time of our life. Lilli and Aaron went on a ride while I checked my email on my Blackberry (remember that?). I saw an email come across the Yonder e-group (remember THAT?) announcing the results of the annual Yonder Poll (AND THAT?). I scrolled down through the categories: Favorite Yonder Song- Keep on Going; Favorite Dave Song- 8 Cylinders; Yonder Hall of Fame- Lilli Trippe.  I was stunned. Stunned and heartened and driven to tears that the kinfolk community would honor her in such a meaningful way. Just when I thought that Disney World with a toddler could get no better, it did.

That year, at NWSS, Yonder planned an induction ceremony. Not just for Lilli, but for all the Hall of Famers. So we knew that String Summit would be special that year. Then that got better too.  In April, Scotty Loeber, merch man extraordinaire, announced on Spring Tour that he was following in the steps of Pastor Tim and would shave his head to raise money for childhood cancer research on stage, at String Summit!

And then it got worse. In the early Summer of 2011, Lilli’s health declined. Fast. In June, she went from walking and talking and laughing to being on hospice, sleeping most of the day, and begging me for more morphine. And then, on July 5, in the very early morning, she kissed our lips, sang a song, and said goodbye. Aaron and I were so damn lost. But we did the same thing we always had before, we leaned on our family and our friends and we knew that if there was any hope for healing, Horning’s Hideout was a damn good place to start.

And Yonder Mountain String Band and Skye and Gregg and the NWSS crew made sure that healing was on the schedule. They made space for my family, they encouraged everyone to dress up in pink and get “Frill for Lilli”, they gave Scotty Loeber a time slot to shave his head. I could tell you how special it was. I could try to describe all the love and tears and magic that went on that day, but I think you should just relive it. Ben singing “Come Together” while Scotty went bald is one of my most powerful memories. Ever. And it wasn’t just the healing it engendered, it was the tradition it inspired, that it still inspires.

Every year, Yonder and the NWSS crew let us continue this great tradition. They let us continue to heal, continue to celebrate her short life, remember her amazing spirit, and at the same time, do good things for kids with cancer. Please help us help them by donating today.  We’ll see you in just a few weeks at Horning’s HIdeout. Don’t forget your pink! 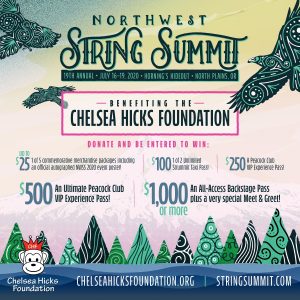